Zuckerberg Predicts Smartphone Glasses and AI in our Future

According to Mark Zuckerberg, the smartphone will die and we will be able to talk to computers. These predictions, and so much more were presented in the latest Facebook F8 Conference in San Jose, California. These predictions were part of the expansion and growthÂ by the Facebook Company and its CEOÂ outlined what he has planned for his company and for consumers in the next 10 years. 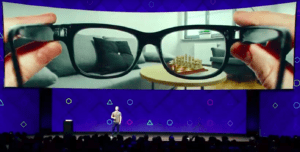 According to Zukerberg, in 10 years time, the entire world will have internet access. Mostly due to the advances in technology and access spreading each year, but also partly due to Internet.org, which is the internet connectivity branch of the Facebook Company. Zuckerberg also unveiled his plan of making the smartphone obsolete and how users will be using glasses as a way of connecting and interfacing with the internet and with other people. Not only that, but by 10 years time, Zuckerberg believes that we will have AI (artificial intelligence) good enough to converse with people.

The glasses, together with this new AI technology, will allow people to communicate and type through impulses in our brain. The glasses are basically a way for our eyes to project what we want. For most people, the world that Facebook is envisioning is very ambitious and is leaning more towards science fiction, rather than science. These advances creates new and exciting ways that people can communicate and share information, but it also opens up a lot of questions, such as the privacy and personal space that a user will lose with that kind of connectivity. Â But if Zuckerberg thinks he can pull this off, maybe he sees something that we normal Facebook users cannot.