It seems that celebrating love is not just for humans. This past Valentine’s day, the Detroit Zoo celebrated the day of love by giving the zoo animals red heart-shaped treats. The zoo keepers at the facility handed out these special gifts to the animals as part of their Heart Fest event. The public was invited to watch as each of these creatures was given their treats. 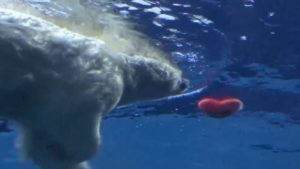 Among the animals that were given heart-shaped treats were the zoo’s wolves, polar bears, camels, and many others. When the treats were opened, each creature received a special snack or gift designed specifically for their tastes. For example penguins received special rocks that were painted by guests. When a male penguin chooses a mate, he does so by offering a pebble or rock as a symbol of his proposal. 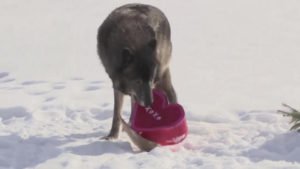 “They’re all getting a variety of different themed things. Some of them are getting what we called ‘ice treats,’ which is when we take some of their diet and we freeze into ice and it kind of makes a Popsicle. And it’s fun for them to tear at and tear apart and play with or swim with in the water. And we’ve also made them look like hearts and have a Valentine’s theme with it,” said Elizabeth Arbaugh, the zoo’s curator of mammals

Arbaugh also said that the zoo provides an equal amount of treats for all its animals so that each creature “gets a chance to enjoy and get the appropriate treats.” While not everyone gets something edible, all the animals receive some form of treat from the zookeepers.