Zoo Accused of Painting Donkeys to Look Like Zebra

A zoo in Egypt has officially denied recent accusations that they painted a donkey to pass it off as a zebra. The accusations came after photos of the animal went viral. The photos of the animal show a “zebra” coming close to a zoo visitor. Only the zebra looks an awful like a donkey and the stripes have some strange smudges on parts of its body. The photos were posted on social media where it quickly went viral. 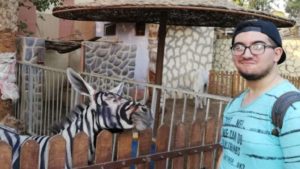 It all began when Mahmoud Sarhan visited the International Garden municipal park in Cairo, Egypt. He saw something that did not look quite right in the zoo. He approached the zebra pen and took photos of the “zebras” that were lounging there. He posted the photos on his social media page and it was viewed and shared thousands of times. Several social media users have noted that the animal has unusually long floppy ears that are similar to that of a donkey. Zebra ears are usually more rounded and short. Critics have also noted the unusual smudges on its face and there were some unclean striped on parts of its body. 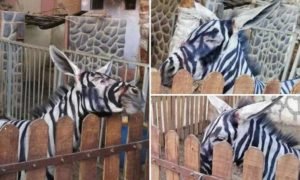 The director of the zoo, Mohamed Sultan has since issued a statement denying the accusations that the animals in the pens are not what they are advertised to be. This is also not the first time that a zoo has been accused of displaying fake zebras. A zoo in Gaza painted two donkeys to look like zebras. While in 2009, a zoo was accused of placing stuffed animals on display because of a shortage of animals.