Earlier this week, YuMi the robot was selected to conduct the Lucca Philharmonic orchestra. He was accompanied by famous Italian tenor Andrea Bocelli. The two-armed robot was designed by Swiss firm ABB. This was the first time that YuMI had ever conducted. He made his debut during the First International Festival of Robotics at Pisa’s Verdi Theater. This robotic milestone comes just weeks after another humanoid robot named Pepper conducted a Buddhist burial ceremony. 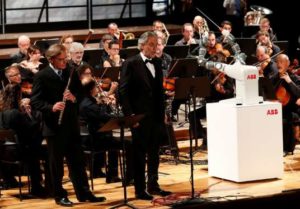 YuMi was taught the movements by the orchestra’s resident conductor, Andrea Colombini. The conductor held its arms in rehearsals so the computer could memorize the correct gestures. The robot will not be able to improvise on the movements and the tempo and pace should be precise to properly conduct the orchestra. YuMi’s name is a play on the words ”you and me”. 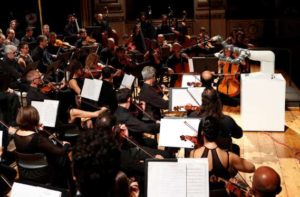 “We basically had to find time to understand his movements. When we found the way, everything was pretty easy,” said Colombini. “It is absolutely fantastic. And the technicians were fantastic just to make everything perfect, especially in the length and in the speed of the gesture, which is very important.” YuMi conducted three of the eighteen pieces that were performed by the orchestra earlier this week. Among the pieces he conducted was the famous aria la Donna e’ Mobile, from Verdi’s opera Rigoletto.

“I think tonight we’re truly making history and writing the future of robotics applications ,” said ABB CEO Ulrich Spiesshofer. “YuMi demonstrated how intuitive, how self-learning this machine is — how wonderful our software really is in learning the movement of a conductor, sensing the music, and really conducting an entire team.”