Earlier this week, 7-year old Piero Arroyo was all smiles as he got to be a deputy at the DeSoto County Sheriff’s Department in Mississippi for an entire day. Arroyo was given his very own uniform, along with patches and a tie. The uniform also had his name on it, the brass, and even the stripe down the side of the pants. He also was given the chance to ride shotgun on a real police car. During his day on the line of duty, he was also able to place handcuffs on a “suspect”. The entire day was a dream-come true for the little boy who is currently battling cancer. 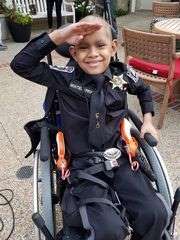 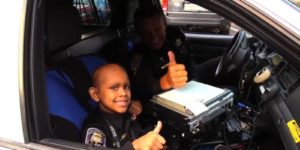 “I can’t describe the words, what it was like to be able to be there and be part of that, to see that young man who’s been through so much, to make him smile,” said Sheriff Bill Rasco. “Every time we’d give him a gift, his face would light up, and he’d say, ‘Wow!'”

“At the end of the day I could tell he was tired, but he was smiling and having a great time. To be part of that, it’s emotional,” Rasco said. “We sometimes forget that we’re blessed. It’s a privilege to bring joy to his life. It means so much.”