WWII Bomb Scare Turns out to be Giant Zucchini

Earlier this week, a concerned citizen alerted the police to what he thought was a bomb from the Second World War. He was in his garden when he saw this large bulging cylinder jutting from the ground. But when the authorities arrived, it turns out that the bomb was not a bomb, but it was actually a vegetable. 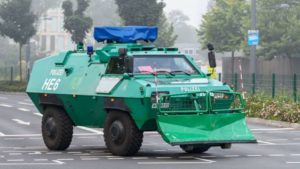 Officers were called in to investigate a possible bomb found in the garden in a property in Bretten, which is located near the southwestern German city of Karlsruh. But when they arrived in the premises, instead of finding a nearly-century old bomb, they actually discovered a courgette, or a very large zucchini. In a statement that they released last week, the officers said that the vegetable was 40 centimeters long and really did look like a bomb. 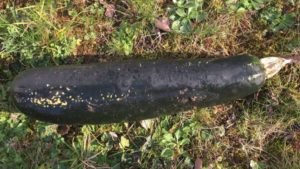 Courgettes are very dark and could resemble old steel. The courgette that was found weighted 5 kilograms and may have been thrown over into the man’s garden over a hedge. Despite the funny outcome, finding bombs from old wars is actually a reality in this region. Unexploded bombs are often found at German buildings and can cause a lot of disruption. In some cases, authorities have had to evacuate an entire city block until the area is safe.

Just this September, around 60,000 people had to evacuate their homes in Frankfurt as police and explosives experts had to defuse a large wartime bomb. The large 1.8 ton British bomb was found during construction work in the city.