In Israel, a large Hippo from the Ramat Gan Safari found an open gate and walked straight out into the public and towards freedom. There was nothing to stop the large mammal from going to wherever he wanted to. Thankfully, the animal decided that he had enough of the real world and walked back to his enclosure after only two minutes, to the relief of the safari zoo keepers and security personnel. 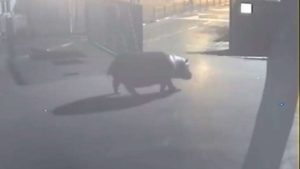 The young hippopotamus was slowly walking around the safari when he encountered an open gate. The hippo slowly strolled out of the gate and wandered outside the facility. He walked around for a few minutes before heading back the same way and into his enclosure through the same open gate. According to its handlers, the outside world could have been just too strange and unfamiliar and caused the hippo to return to much more familiar surroundings. 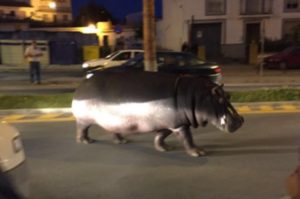 Surveillance footage shows the large hippo strolling back into the zoo with a security guard carefully following from behind. When the hippo was back in the zoo, the guard closed and locked the game. Once the gate was secured, the guard could be seen jumping for joy. This incident could have gone much worse. Hippo’s are actually one of the most ornery and dangerous animals in the world and they cause several deaths each year (mostly in the wild). Despite being mostly vegetarian, these large animals are very aggressive and territorial and they can cause much damage and injuries with their large mouths and sharp teeth.