Toilet Made out of Louis Vuitton costs $100k

Earlier this week, the Guggenheim Museum installed a toilet made completely with Louis Vuitton bags. The toilet bowl was made by artist Illma Gore for the luxury resale platform Tradesy. The toilet is made up of $15,000 worth of monogram leather taken from the famous bags of Louis Vuitton. The lining of the toilet is made out of leather, while the inside of the bowl is made out of gold. 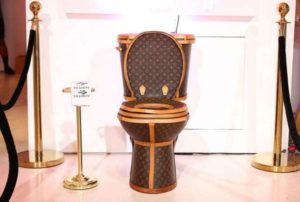 Even when seen from afar, people can recognize the trademark brown leather of Louis Vuitton bags. These designer bags are expensive and usually purchased for the brand and status symbol. The toilet is fully functioning and anyone can use it if they wanted to. The toilet is an art piece that includes a large pink neon sign behind it that says “No Fake S**t”. Â It is for sale for the whopping price of $100,000. While the leather is taken from used bags, the toilet itself has never been used. 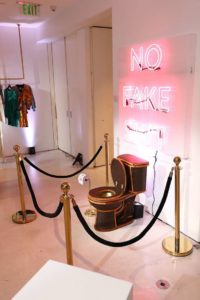 This isn’t the first time that a toilet has been used as an art exhibit. Just last year, the Guggenheim Museum featured a piece that had a one of a kind toilet made out of solid gold. Just like the Louis Vuitton toilet, this golden john was fully functional. It was created by Italian artist Maurizio Cattelan exclusively for the museum. This piece was very expensive and was only put on display and was not for sale. The Louis Vuitton Company, also known as LV, has been in the fashion and luxury retail business since 1854.