Earlier this week, the world’s tallest man met the world’s shortest woman in an event organized by the Egyptian Culture Ministry. The pair met up with the grand view of the Egyptian Pyramids as their backdrop. The world breaking pair joined people from all over the world as they tried to break many different weird and unusual records. 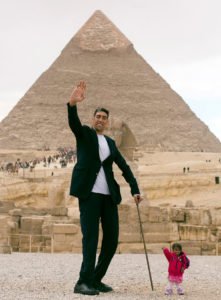 31-year old Sultan Kosen is from Turkey and stands at a staggering 8 feet and 3 inches tall, currently the tallest man on the planet. His counterpart is 24-year old Jyoti Amge from India. Amge is a diminutive 2 feet and an inch tall. Kosen is exactly four times the height of Amge. Their difference in height is so great that Kosen has to sit down and crouch just to be able to shake Amge’s hand.

Kosen has always been tall for his age. Due to his extreme height, he was unable to finish school. So he began working as a farmer to support his family. As a teenager, he was signed to the Galatasarat basketball team in Turkey, but he wasn’t good enough to sustain a spot on the team. Now Kosen has to use a cane to walk around because of problems with his feet and legs. 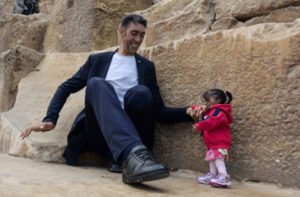 On the other hand, the tiny Amge is known in Nagpur, India as a TV personality. She has been featured in several local TV shows. In fact, she is actually considered to be the manifestation of a goddess in her hometown. She was also cast in a season of American Horror Story: Freak Show.