World’s Spiciest Chip Is Sold Only as One Chip

Earlier this week, the world’s spiciest chip was unveiled. The snack, which is called the Carolina Reaper Madness Chips by Paqui Chips will be made available once again. The hot snack was first made available last year, and to great success. But the company producing the spicy snack will no longer be offering an entire bag of chips. Instead they will be selling the product by chip. One bag of the Carolina Reaper Madness will only contain one chip. 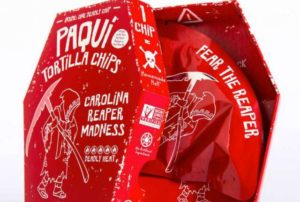 There are many reasons for this repackaging of the chip. For one, it is a marketing gimmick that is sure to garner a lot of attention. The other reason is that most people are unable or unwilling to finish an entire bag of the chips. Most customers purchase the world’s hottest and spiciest chip out of curiosity and to attempt to consume it. Most of the bags of chips are not finished or half eaten then discarded. This is understandable because the chips are made from the world’s hottest peppers, the Carolina Reaper. To emphasize how hot the chips really are, the new packaging is shaped like a coffin. 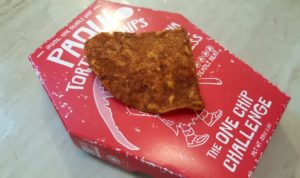 Last year’s chip was already hot and spicy, but according to the manufacturer’s website, they will make this version even hotter by adding ghost pepper and chipotle seasoning. While it is considered a delicacy, peppers like the Carolina Reaper are very hot and can be very dangerous. It can cause vomiting, shortness of breath, and even loss of consciousness. The chip will only be sold on the website of Paqui’s chips.