A baby panda that was born in a Japanese Zoo three months ago was recently named “Xiang Xiang”. The name was said to be based on a Chinese image of a blooming flower. The zoo recently released a new video clip of the baby panda being taken care of by its mother Shin Shin. Tokyo governor Yuriko Koike explained that the name of the baby panda was derived from the Chinese character that stands for flower fragrance. The name was picked from more than 300,000 suggestions from the public. 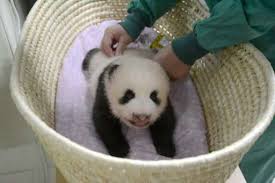 The naming of the baby panda was among the top news stories of the country, despite speculation of the nation’s Prime Minister calling a snap election. It seems people were more interested in the baby panda then they were with recent political events. Shin Shin gave birth at the Ueno Zoo in Tokyo in June. The baby panda weighed only 100 grams and was small enough to fit on a human palm. 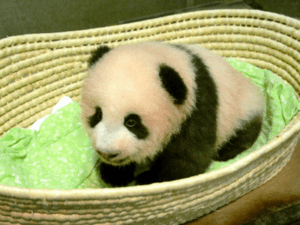 The panda mother Shin Shin, mated with Ri Ri earlier in the year. Shin Shin had given birth in 2012, but the cub died six days later from pneumonia. That was the zoo’s very first panda delivery in 24 years. This time around, the zoo’s staff was very protective of the new born panda and didn’t show it to the public until three months later. The zoo also wanted to give the panda space and privacy to create an environment for the pandas to mate and nurture a family. Pandas are known to have a difficult time in mating, especially in captivity. Having a successful birth is vital for the species because there are only 2,000 giant pandas left in the wild.