When it comes to airline employees, there is a reason why their uniforms are made up of bright primary colors. This is so that pilots and drivers can easily see them on the runway and on the tarmac. But for this airline employee, he took things to a different level in terms of visibility. At the Southwest Airlines airport in Orlanda, Florida, this employee dressed up in a T-Rex costume to guide a plane to its proper spot. 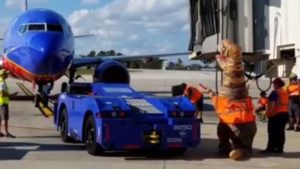 It was “Spirit Week” for the Airline, and the costume was said to be part of celebrating Spirit Week for the employees. But even with the special circumstance, it was odd to see a 7-foot inflatable dinosaur costume guiding a plane to its parking spot. The employee in costume was seen ushering a plane at the Orlando International Airport earlier this week.

A video of the employee wearing dinosaur costume was posted on Facebook, where it quickly went viral. The video has garnered several hilarious comments from netizens all over the world. One of the more popular comments was about how the picture helps in people starting their week off right with a laugh. 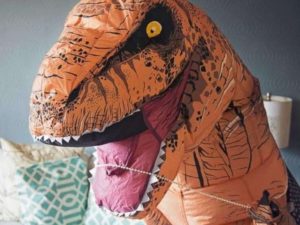 “Wouldn’t you love to look out the window and see that!” said one of the comments. But the comments were not just from the social media audience. An employee from the airport also made some funny comments about the attire of the T-Rex. The employee quipped:

“Looks like that safety vest is a bit snug. Should have ordered the rex-tra large. We’ll see ourselves out,”