The Eh’hÃ¤usl Hotel in Amberg, Germany is the smallest hotel in the world. So small, in fact, that it fits in the narrow 8 feet of space between two houses. The hotel holds the record as the smallest hotel in the world today. The entire hotel is so small that there are even one room apartments that are bigger than the entire establishment. The hotel takes up only 570 square feet across seven floors. 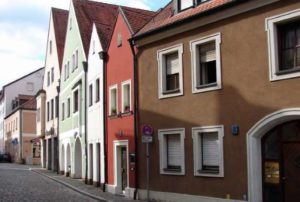 Inside the Eh’hÃ¤usl Hotel, guests can enter their rooms (only two at a time) and enjoy their cozy rooms. The hotel is made up seven stacked rooms, namely a bedroom, a fireside lounge, a salon, and a bathroom with a whirlpool tub. The hotel also has a unique history that contributed to the design of the hotel. But this unique history is also one of the reasons why the hotel is considered to be one of the most romantic destinations in Germany.

In 18th Century Germany, couples could not get married unless they could provide proof of landownership. So a savvy businessman took advantage of this law and created a small house in a narrow alleyway. The “house” was then sold to a couple who wanted to get married, who would then sell it to another couple, and so on. This unique history is why the hotel is named the Eh’’hÃ¤usl. The name, when roughly translated, means “wedding house”. Today, the hotel is no longer used as a legal loophole to get married, but the spirit of passing occupancy from one couple to the next still remains.