For the past three decades, postman Marcos Perez spends every two weeks at the South Texas Blood and Tissue Center where he commits two hours to sit down and donate a gallon of his blood. The 57-year old Perez has now eclipsed the 100-gallon mark, and his contribution could very well have saved the lives of thousands of people around the country.

Perez contributes blood, but also donates his blood platelets, a component of blood that allows him to donate more often. Donating blood or red blood cells takes a little while to recover before you can safely donate again. Why does Perez donate so much? He says that as a premature baby, he needed a blood transfusion to survive past infancy. And now he says that he’s returning the favor and paying it forward. 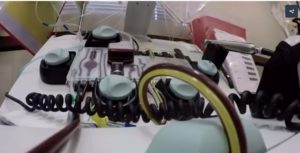 “They might live an extra day, a year, a month, who knows. Maybe they will live forever,” Perez says about the potentially thousands of people that he could have helped through his donations. “(It doesn’t) cost me a dime, only some time. I’m 57 and I’ve already got 100 gallons! When I was growing up, my dad told me a friend of his donated blood for me,” Perez recalled. “His name was Mr. Aguilar. He took the time to donate, so he saved my life.Â  If you make time to go eat, you make time to go to the movies, (then) you can make time to come donate. Just make some time. Give from the heart. That’s what it takes. You’ve got to give from the heart.”