Gulliver could very well be the world’s smallest colt. The miniature horse measures at just 49 centimeters or a little over 19 inches from hoof to shoulder. That height barely passes the knees of some people. The horse was featured at the 20th Hipposphere International Equestrian Exhibition at the Expoforum Convention and Exhibition Center in St. Petersburg, Russia. 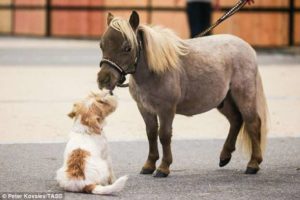 The American Miniature horse, affectionately named Gulliver, was born in June of last year at the Hidalgo pony farm in Russia. According to its owner, Elena Christyakova, he was barely the size of cat when he was born. The horse was just 30 centimeters (12 inches) and weighed just three kilograms. Most American Miniature horses measure at 85 centimeters or 34 inches, which made Gulliver unusually small, even for his breed. People thought he wouldn’t survive past birth, but he was able to pull through. It was one of the reasons why Elena calls Gulliver her miracle horse. 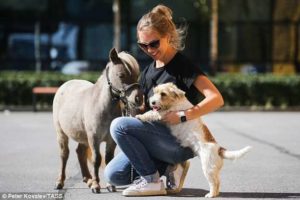 The horse has a chance to be named as a world’s smallest male horse. Right now he holds the record, but he is just a foal or a young horse, meaning he could still grow a little more when he reaches maturity. The current smallest horse is Thumbelina, a miniature sorrel brown mare, who is only 44 centimeters or 17.5 inches tall. Gulliver is named after the titular character in Gulliver’s Travels. Ironically, his namesake in the story is actually a giant who is captured by little people in an island called Lilliput.