Football Team Mascot is a Boiler

When it comes to sports mascots, it is actually normal to have silly and ridiculous characters represent a team. But a football club in the English League may have taken the cake when the unveiled their new mascot to be a boiler. That’s right; the West Bromwich Albion club’s official mascot is a white vessel for heating water with arms and legs. The story of the mascot has since gone viral; with people making hilarious comments and remarks on the funny choice of mascots for the West Brom team. 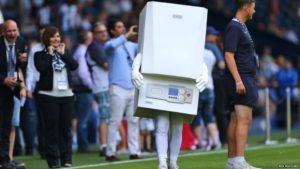 The mascot made its debut during a match between West Brom and Bolton. It was the first match for the Albion team in the league. A lot of people were initially confused on what the mascot was, and many people laughed out loud when they found out it was a boiler. Despite the Baggies losing 2-1, the star of the match was definitely the walking boiler mascot, which you don’t see every day. Despite the hilarious nature of the mascot, it is actually not a joke. The newest sponsor for West Bromwich Albion is Ideal Boilers, a seller of household appliances, and you guessed it, boilers. 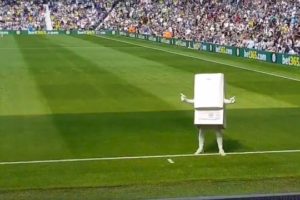 “To be fair to the boiler, he’s now having a kick around with the mascots and letting the kids nutmeg him. I don’t know if it’s the suit or not, but he’s walking around with a massive strut. I can’t stop laughing.” said one twitter user. “West Brom having a Boiler as a mascot is the highlight of the year. Might as well jib the entire season off, nothing is going to top that.” said another.