Earlier this week, archeologists discovered what very well could be the oldest cheese in the world. The cheese was found to be buried beside a Mayor of Memphis, the ancient Egyptian capital, who served during 1213 MC. The final resting place of the mayor was found in 1885 and rediscovered again in 2010 after being lost in the desert sand for thousands of years. The cheese also has a very interesting secret. It had been contaminated with Brucella melitensis, a deadly bacteria. 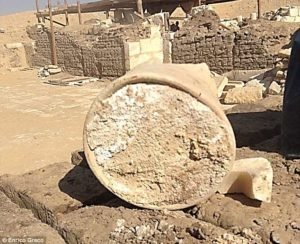 The cheese was found in a jar and it was described as a solid whitish mass. There was also canvas fabric that may have been used to cover the jar and preserve its contents. When researchers dissolved the substance, they found protein and analyzed them with liquid chromatography and mass spectrometry. Â It was then that they determined that it was a product made from cow milk, or maybe even sheep or goat milk.

“The characteristics of the canvas fabric, which indicate it was suitable for containing a solid rather than a liquid, and the absence of other specific markers, support the conclusion that the dairy product was a solid cheese,” wrote one of the researchers. 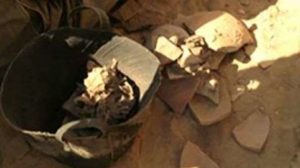 “The constituting material was a dairy product obtained by mixing sheep or goat and cow milk.” said Dr. Greco, “The interactions for thousands of years with the strong alkaline environment of the incorporating soil rich in sodium carbonate and the desert conditions did not prevent the identification of specific peptide markers which showed high stability under these stressing conditions.”