84-year old Jim Arrington from California has just been declared as the world’s oldest professional body builder. But don’t let his age fool you. According to Jim, he has no plans of retiring anytime soon. Jim has been competing in weightlifting and bodybuilding since 1947, when he was only 15 years old, and he hasn’t stopped since. He has competed in almost every competition in the world and won many awards. To this day, Jim still trains and enters competitions. 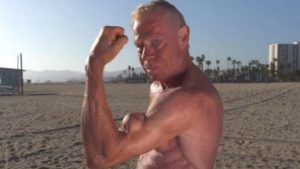 “Up to now, I was just into bodybuilding and entering contests as long as I possibly could before I fall apart or die or something like that,” Arrington said. Jim is now entering his 70th year of actively competing in bodybuilding and weight lifting. He has competed in more than 60 competitions and won 16 of them. With his most recent competition, he officially became the Guinness World Record holder for the older competing bodybuilder. 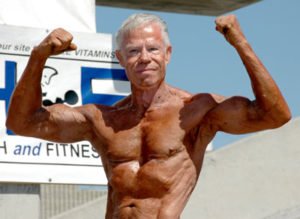 “You know it’s a great feeling to be in the gym, get blood flowing through your muscles and kind of pumped up,” Arrington said. “I will keep going as long as I possibly can as long as I enjoy it. I don’t think I’ll really get tired of it.” Arlington said that one of the keys to his longevity is enjoying what you do and having fun while competing.

“I want to grow up to be like him, ageless,” said Jerome Ferguson, a professional bodybuilder. “I mean, 84 years young with abs. Most people at 84 are dead.”