An Ice cream company founded in San Rafael California named Three Twins Ice Cream is offering what they have called the world’s most expensive ice cream sundae. The sundae is priced at an incredible $60,000. But it isn’t just any ordinary sundae. The ice used in the desert is taken from the glacial ice of Mount Kilimanjaro, the tallest mountain in Africa. 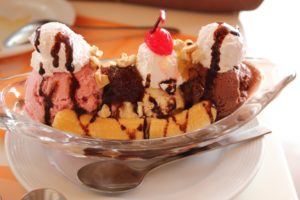 The sundae is not made from gold like most expensive desserts. It actually comes with first class plane tickets that will take you to Tanzania, where Neal Gottlieb, the founder of Three Twins Ice Cream will hand churn ice cream using glacial ice from the mountain. The company initially came up with a banana split topped with syrups form three rare dessert wines that comes with a personal cello performance and a vintage ice cream spoon from the 1850’s. That dessert costs $3,333. But they followed it up with this sundae which is more than twenty times the price. It was then that the Mount Kilimanjaro ice cream took over officially as the most expensive ice cream sundae. 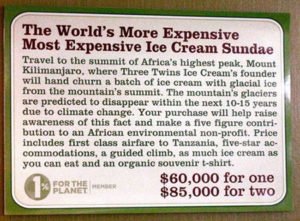 “The mountain’s glaciers are predicted to disappear within the next 10-15 years due to climate change,” says the product description, “and your purchase helps raise awareness of this fact with a five-figure contribution to an African environmental non-profit.” Aside from the sundae, the package also includes accommodations in a first class hotel, as well as a guided hike up the mountain. The company is also offering a package deal for two at the bargain price of $85,000.