Since then invention of the 3D printer we’ve seen almost everything made with the innovative machine. We have seen 3D-printed cars, 3D-printed furniture and even 3D-printed body parts such as prosthetics and even organs. But scientists in France have recently unveiled the very first 3D-printed house. It is the first of its kind and fully functional and ready for occupation. 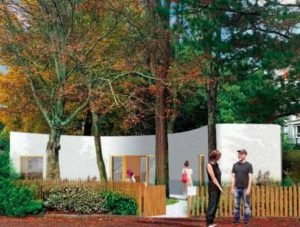 The new house was unveiled in the French city of Nantes. It is a five-room, 95-square meter house. The residents of the house will be a local family that qualifies for social assistance. The lucky family will be chosen in June. Local authorities have said that they are considering the feasibility of developing an entire district made out of houses like this.

“Is this the future?” asked Benoit Furet, a University of Nantes professor who worked on the project. “It’s a solution and a constructive principle that is interesting because we create the house directly on site and, in addition, we are able to create walls with complex shapes.” It took an entire year to complete the project. 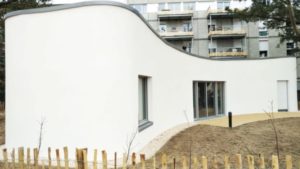 Technically, this is not the first building made using 3D-printing technology, but it will be the first that will be permanently habituated. Academics, engineers, and manufacturers have all lauded the project and they say that the process could be scaled up to build more energy efficient homes quicker and for a more affordable price.

The machine used to make the house was a printer called BatiPrint3D. It took just 18 days to complete the initial shell of the house using a polymer material. Concrete was then used to fill in the hollow walls for insulation.