Earlier this week, the newest building opened in Pyeongchang, South Korea. This new structure has the distinction of being the darkest building ever made. The opening of the “darkest building in the world” is ironically close to the Olympic Games, where the bright white snow of the winter sports is a stark contrast against the pitch black structure. 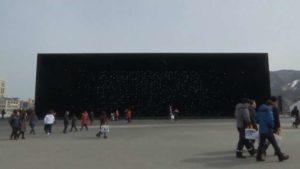 The structure was designed by British architect Asif Khan. The building was erected near the Olympic stadium and was coated in a new material called Vanta Black VBx2, which can absorb almost 99 percent of the light that hits its surface. The x2 on the coat means that the coat is extra dark for an even blacker coat of paint on the structure.

According to Khan, he took inspiration from outer space and the surface of the building represents the universe. Aside from the dark coat, there are also over 2,000 light rods scattered all over the building to represent the stars. Visitors that enter the building feel like they are entering another universe. Inside, the rooms are actually completely white with water droplets on the marble carvings. The building is a temporary pavilion and showcase center for the car manufacturer Hyundai. 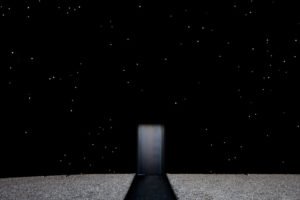 “It symbolizes a very pure future society, without any constraints and very big positive opportunities,” said Ilhwan Kim, a manager of Hyundai Motor Creative Works, “Each droplet symbolizes fuel cell electric vehicles that are running inside the new society, and also brings an idea of fuel, the fuel that is hydrogen.”