There are many unique and strange creatures on earth, but little can compete with the exceptional nature of the giant pink love slug. These rare creatures can only be found in one place; in an extinct volcano in New South Wales, Australia. And even if you do venture there, it could be rare to spot these bright pink slugs. 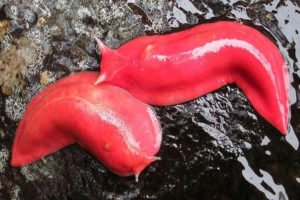 “Recent morphological and genetics work by a researcher working on this slug family â€” the Athorcophoridae â€” has indicated the Kaputar slugs are a unique species endemic to Mount Kaputar and the only representative of this family in inland Australia,” says Australia’s National Parks and Wildlife Service ranger Michael Murphy. The slugs are also their own species and they can grow to up to 8 inches in length. 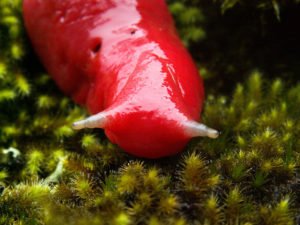 “It’s just one of those magical places, especially when you are up there on a cool, misty morning,” said Murphy. “It’s a tiny island of alpine forest and hundreds of kilometers away from anything else like it. The slugs, for example, are buried in the leaf mould during the day, but sometimes at night they come out in their hundreds and feed off the mould and moss on the trees. They are amazing, unreal-looking creatures.”

“There’s one idea that the pink color camouflages them against the color of fallen snow gum leaves on the forest floor,” Murphy said. “But then again they spend a lot of their time way up in the canopy nowhere near the floor… so it might just be that if you’re a giant slug way up on an isolated mountain top, you can be whatever color you like.”