Alexandr Dmitriev and his wife Mariya have a normal life in their studio apartment and pet cat in Penza, Russia. The only problem is that their “pet cat” is a 500-pound cougar named Messi. The couple decided to adopt the cougar from a petting zoo in 2016 and they have been raising the fierce feline as a house pet ever since. Despite having just a studio apartment, all three of them seem to be living comfortably under one roof. 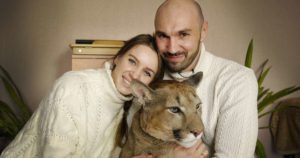 “The first time we saw him in the zoo, I think we both had the same feeling towards this animal,” said Mariya Dmitriev, “It was such an excitement, such tenderness. Like, I don’t know, it’s impossible to grasp but it was very strong.” Since that moment, the large cat has been living with the couple in their apartment as a pet.

According to the couple, Messi follows a strict diet of chicken breast, turkey, beef, and some bones. He also gets treated to a bath, has his nails trimmed, and his teeth checked as he receives a special brush-down for his fur every day. The amount of food he eats costs the couple around $10 a day, but they say that Messi is worth every penny. 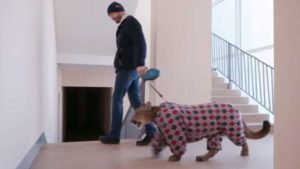 “We give him different types of meat so that he can get all the necessary vitamins and micronutrients,” Alexandr Dmitriev said. The couple also has a special bond with the cat and they say that he loves being cuddled and petted. So far, the cougar has never bitten the couple, and they even say that they trust the large cat completely.

“We live together, sleep together,” Alexandr Dmitriev said. “He convinced us with his behavior that he’s a full member of our family and that he wouldn’t be doing anything bad apart from some small naughty things. He’s very kind and likes contact. He gets on very well with people.”