Couple Win $1 Million Lottery after Losing Everything in Fire

The term what goes around comes around is never more evident than with this Canadian couple. The couple lost everything in a wildfire last year in what some would call a stroke of bad luck. But then this year, the couple hit it big when they won the lottery in what would be most incredible swings of luck that people have ever heard of. 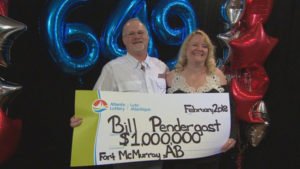 Bill Pendergast was just trying to make it day by day. He had lost everything in a wildfire last year and he was just starting to recover. He was visiting his sick dad in Newfoundland and Labrador last month when he stopped in a convenience store to get his father a soda. His dad had called him earlier in the day and made a request.

“Dad called and asked me to stop on my way back to the hospital and pick him up a cold 7-Up,” said Pendergast in a statement from the Atlantic Lottery. Then on a whim, he purchased a $3 lottery ticket. Little did he know that that ticket would make him a millionaire. The couple found out the next morning when the winning number was announced. 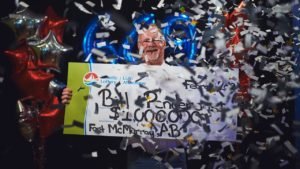 According to the couple, the money will be used to help rebuild and replace all the things that they had lost during the fire. This includes paying for the ongoing construction in their house. But not everything will go into rebuilding their home; Pendergast said that he also wanted to fulfill some of his life dreams.