When we think of American’s founding fathers and their well-coifed white curls and ribbons and ties, we often think that these perfectly groomed hair pieces were wigs. But that is not the case with the one of the greatest American Presidents George; Washington. As it was revealed earlier this week, Washington had a very incredible routine to keep his hair perfectly the way he wanted it. 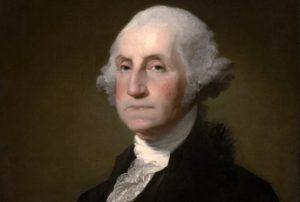 Robert Krulwich of the National Geographic made a report based on a 2010 biography by Ron Chernow called “Washington: A Life”. In the book, he reveals that the president, in fact, never wore a wig. The signature hair style was a result of an elaborate and meticulously constructed coiffure that would put most modern women and their hair routines to shame.

To achieve his signature hair style Washington would keep his hair long then pull it into a tight braid and tie it at the back. This would showcase his forehead, which was stylish at the time. Then he would bunch the slack into a black silk bag at the nape of his neck. Then he would fluff the hair on each side to make the signature “wings”. He would then secure the look with pomade and natural oils.

Another revelation about Washington and his hair was that it was not naturally white. Washington had a natural reddish brown hair and he would lavishly powder his head until he achieved the white look that we all know today. This style was very trendy during the 18th century, especially with military men.