Earlier this week, Richard Browning, a British inventor, set the record for the highest speed in a body controlled jet suit. Browning used his own homemade jet suit that uses high speed air exiting around his body for propulsion. Browning was able to reach the speed of 32 miles per hour on his third timed attempt at Lagoona Park in Reading, England. It was fortunate that he broke the record on his third try because on his fourth, he mistimed a turn and crashed into the water. Fortunately he was uninjured in the crash. 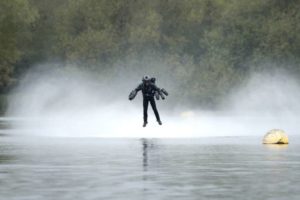 Browning is a former Royal Marine Reservist. He started working on his jet suit, which he named the Daedalus, last year and he has been perfecting his design for a higher and fast propulsion system. His jet suit is patented so Browning is keeping his technique to himself. But from what he showed in his video, the thrust of his jet pack comes from six body-mounted jet engines, similar to those found in model aircrafts. Two of the jets are mounted on the lower back for thrust, while four mini jets are found in his wrists for control. 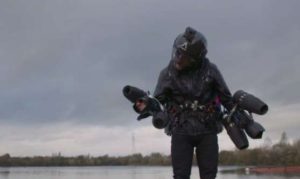 “Daedalus is simply the beginning of a core technology that has endless potential in aviation, commercial and entertainment applications.” explains Browning. His invention is trademarked by Gravity Industries and he hopes to one day kick start a new form of personal flight with his designs. His more recent tests have shown improved control and a streamlined way of flying.Â  Jet packs have always been a big part of science fiction and we have seen many incarnations in TV and movies, but there is yet to be a truly functional jet pack invented for public use.