Earlier this week, a woman by the name of Beth Bornstein Dunnington posted a touching story about how a mother broke down and cried after dealing with her children, one of which had a meltdown at the Los Angeles International airport. Dunnington posted the story on her social media account where it was quickly shared and liked by a lot of people. 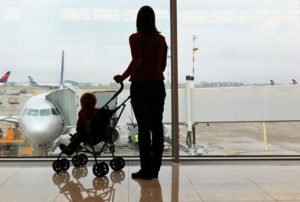 “Something extraordinary at LAX today… (writing this on the plane). I was at the gate, waiting to get on my plane to Portland. A toddler who looked to be eighteen or so months old was having a total meltdown, running between the seats, kicking and screaming, then lying on the ground, refusing to board the plane.”

“His young mom, who was clearly pregnant and traveling alone with her son, became completely overwhelmed… she couldn’t pick him up because he was so upset, he kept running away from her, then lying down on the ground, kicking and screaming again. The mother finally sat down on the floor and put her head in her hands, with her kid next to her still having a meltdown, and started crying.”

“Then, this gorgeous thing (I’m crying just writing this)… the women in the terminal, there must have been six or seven of us, not women who knew each other, approached and surrounded her and the little boy and we knelt down and formed a circle around them. I sang ‘The Itsy Bitsy Spider’ to the little boy… one woman had an orange that she peeled, one woman had a little toy in her bag that she let the toddler play with, another woman gave the mom a bottle of water. “

“Someone else helped the mom get the kid’s sippy cup out of her bag and give it to him. It was so gorgeous, there was no discussion and no one knew anyone else, but we were able to calm them both down, and she got her child on the plane. Only women approachedâ€¦ I will never forget that moment.”