Online shopping has been one of the most important innovations in modern commerce. It is just such a convenience to order something from the comfort of your own home and have it delivered to your doorstep a few days later. But there are times when ordering online can have its disadvantages, as this young woman found out earlier this week. 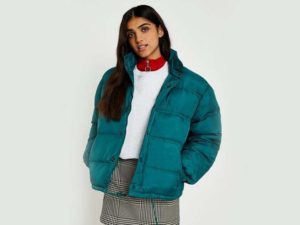 Becky Latham, a student from the University of Manchester, wanted to purchase a coat to help with the springtime cold weather. One of the most recent trends has been puffer jackets. So she decided to order one online from a store called Urban Outfitters. The coat arrived a few days later but it looked nothing like what she ordered. 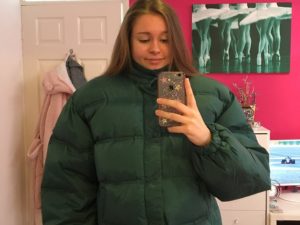 She posted a picture of herself wearing the large puffer jacket with the caption “Described as a ‘bomber-style’ with ‘feather down lining’ the website does state that the genuine vintage item customers receive may vary to the one featured in the photo. Thanks Urban Outfitters, it’s exactly like I imagined.” The post was so funny that it quickly went viral. Her post has more than 15,000 retweets and 32,000 likes, with a lot of comments mocking her and her oversized coat.

There have also been several pictures of memes comparing several characters and celebrities to Latham in her coat. Among the most popular was the balloon girl from Charlie and the Chocolate Factory, Ghostbuster’s Stay Puft Marshmallow Man, and Baymax from animated film Big Hero 6. While there have been a lot of people poking fun, not all comments have been mocking. Some comments have actually offered advice on how having a oversized coat could actually be useful.