A woman in a Minnesota had the most memorable time attending a music festival this past weekend. She had managed to get her head stuck in the exhaust pipe of a truck for at least 45 minutes. It all happened when Kaitlyn Storm was at the Winstock Country Music Festival in Winsted, Minnesota. She had an idea that her head could fit in an exceptionally large exhaust pipe of one of the trucks. She was right, but she had a hard time getting her head out. 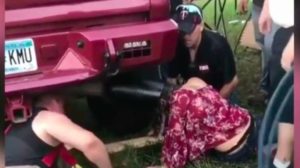 “We were just all having fun and I saw this big exhaust pipe and I was like, ‘Hey, my head could probably fit in that,’” said Storm, “So I tried it. It did fit, but it didn’t want to come back out.” Storm spent at least 45 minutes with her head stuck inside the pipe. She was eventually rescued when firefighters used a power saw to get her free. Storm was unharmed despite being stuck for quite a long time, but the McLeod County Sheriff’s Office cited the young woman for underage drinking. 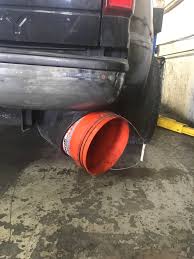 Storm was escorted from the festival once her head was free. The entire ordeal was captured on social media, where it quickly went viral. The video has already more than 2.3 million views. She has been getting a lot of negative comments on social media, especially from people who are questioning her intelligence. But she did receive nice comments from the owner of the truck.

“I did not know him, but everyone who was around me knew him,” said Storm, “He was wonderful. I remember getting my head unstuck, and I just looked at him and apologized, and he said, ‘No, I’m just glad you’re OK. Don’t worry about it.’ He has already fixed his exhaust and is going to be working on that. I did not have to pay for anything like that, because he was absolutely wonderful.”