Woman Wakes up With Python in Her Bed

In London, a woman got the fright of her life when she woke up to find a three foot snake next to her in bed. The snake was a royal python and it was believed to have been a pet that had escaped. The woman saw the reptile and jumped out of bed and rushed out of her bedroom slamming her door shut on her way out, and then she called the RSPCA for help. But by the time the animal collection officer Jill Sanders had arrived in her apartment, the snake had gotten out of bed and could not be found. 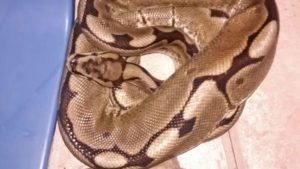 “The poor resident must have had the fright of their life waking up to a snake in their bed.” said sanders, “They jumped out of bed and closed their bedroom door to contain the snake, but when I arrived, I couldn’t find where the python had slithered to. I left my details and told them to contact me as soon as they saw it again.”

Eventually the python was caught by Sanders in a corridor the following day. She was immediately called when the snake reappeared. The RSPCA does not know how the big snake got inside the flat, but they believe that it must have escaped from its cage from nearby. The animal welfare charity says it collects more snakes in the summer as they have more energy in the warm weather to escape their cages and pens. 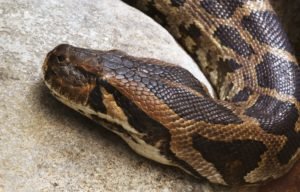 “I’ve been called out to a number of stray snakes in recent weeks and many of these appear to be escaped pets.” says Sanders. “We would always recommend owners invest in an enclosure suitable for the particular species and that the enclosure is kept secure, and locked if necessary, when unattended. Reptiles, particularly snakes, can be extremely good escape artists and will take the opportunity of a gap in an enclosure door, or a loose-fitting lid.”