Woman Unknowingly Wears her Engagement Ring for a Year

When an Australian named Terry realized that he wanted his girlfriend Anna to be his wife, he made plans of the proposal long before the actual date. He made sure that when the time came, not only would Anna be carrying the ring, but she would have been wearing it by almost a year. This was because Terry had the ring hidden inside a necklace that he had given to her on their anniversary. It was a necklace that Anna was constantly wearing for the most part of a year. 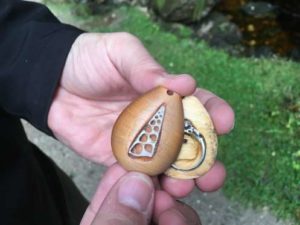 “I made the necklace with two small bits of Huon pine glued together with a thin sheet of paper between them and a space carved out for the ring to fit into. The glue held it together but the paper acted like a seam that I could split open with a knife.” said Terry. Then the dayÂ arrived when he was going to ask Anna the big question. The moment happened during a trip to Smoo Cave in northern Scotland. Terry chose that spot because Smoo was an old Norse word for ‘hiding place’. 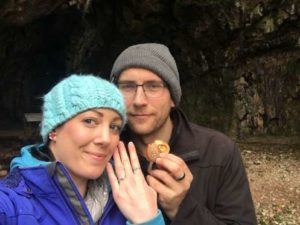 Before Terry proposed, he asked Anna for the necklace to take a photo of it in the caves. Then he secretly broke the seal on the necklace, and when he offered the necklace back to Anna, he got on one knee and revealed the ring hidden inside the wooden necklace. Anna was shocked and confused but eventually screamed yes to her new fiancÃ©, but not before Anna scolded Terry on hiding the ring in the necklace. She yelled: “It’s been in there the entire time?! I could have lost it, you idiot!”