Divorces are part of life for some couples. It’s a frustrating, tiring, and often disheartening process. But this Canadian woman decided she wasn’t to let her divorce make her life worse. Instead she threw a divorce party with her friends. 36-year old Nicole Niesner of Saskatchewan, Canada, was married for 13 years. Then she suddenly received a letter letting her know that her divorce would be finalized. She decided that she would throw a party on that day. 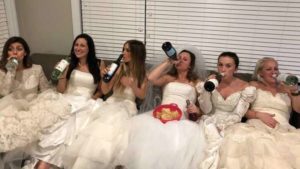 “I did a little of ‘pinteresting’ and ‘Googling’ and I said ‘I should have a divorce party,’” Niesner said, “My friend just said ‘you know what, I am going to take care of it, just be home at 6:30.’” At the party, all of her friends, all of whom were still married, showed up at the party wearing wedding dresses. It was an unexpected but welcome surprise. Niesner decided to join them and dug her dress out of the basement and wore her own wedding dress for the party. According to Niesner, they did a lot of reminiscing about their marriages and children. 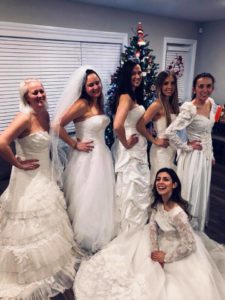 “We kept it really positive, drank some wine, ate some food,” Niesner said. “The wedding dresses were on most of the time, everybody was really digging that. Even though I am okay with being divorced, it just lifted me up and reminded me that I am loved and that I have lots of great people in my life.” Niesner said it was amazing to have all that support on what could have been a bad day.