In the recent US Open for tennis, a woman became the trending topic after she was featured on the big screen of the main stage dunking a chicken tender into a cup of soda and taking a bite. This strange combination was spread on the internet and a lot of people have been critical of her food choice. Photos and videos of the woman have since gone viral on social media.

The woman was Alexa Greenfield. She was watching the US Open with her nephew when the cameraman turned to her and captured her taking a bite of the chicken tender right after dipping it in her soda. According to the 26-year old, it was a habit that she picked up from her father as a little girl after he told her that it helps cool down the chicken tenders. 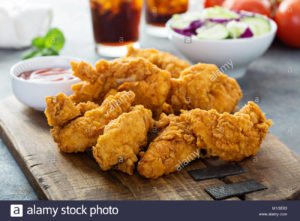 “I don’t even know if that was really why he was having me do it,” said Greenfield in an interview, “I can’t remember not doing it, literally.” Greenfield also says that other members of her family have picked up the unusual habit but she does admit that she is the only one that still does it today. “Definitely no one brought it into adulthood,” she said. Greenfield said she does it every once in a while and she had no idea she was doing it when she was filmed.

She was texted by a friend telling her they saw her on TV dipping a chicken in soda and she knew she was in for a lot of backlash. Â “I was like, ‘Oh noooo,’” said Greenfield.