In Louisiana, the story of a woman who sent in an apology to a local police officer has gone viral because of how she apologized. Not only did she say sorry to the cop, but she also put her apology on a cake and gave it to him. Celina Dally was arrested for public intoxication after drinking too many glasses of wine at a McNeese State University wine-tasting event. During her arrest, she tried to bite her arresting officer. 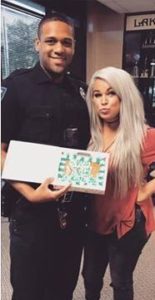 According to a friend, she was driving Dally home when she passed out in the car. The friend was concerned for Dally’s health so her friend called the paramedics. That’s when the police arrived to check on Dally and her friend. When Dally was questioned by the police, she started to be unruly and tried to bite one of the officers. By the end of the night, Dally was in a jail cell. When Dally learned what happened the next day, she felt so bad about the incident that she decided to apologize to the arresting officer with a cake. Â The cake featured a message in frosted lettering that read: “I’m sorry I tried to bite you.” 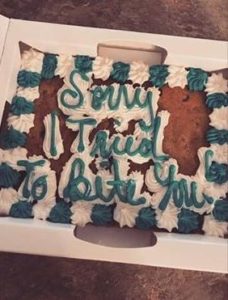 “Most of you DONT know lol but I was arrested on October 7th for public intoxication and also for assaulting an officer (not proud of it but it happened). Anyway, as most of you DO know I’m way too nice. My conscience was eating at me so I decided to find Officer Guillory (who’s super sweet btw) and apologize w a cookie cake! lol just thought I’d share w y’all,” Dally wrote in a social media post. A photo of Dally and her arresting officer was posted in social media. Â She also posted a picture of the special apology cake.