Note From Einstein on the Key to Happiness Sold for $1.5 Million 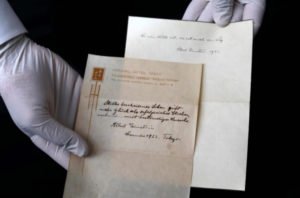 In November of 1922, physicist Albert Einstein traveled from Europe to Japan for a series of lectures. During his travels, the then 43-year old scientists learned that he had been awarded the Novel Prize in physics. Einstein was staying in a room at the Imperial Hotel in Tokyo when a courier came to his room to deliver the news. Einstein did not have any money to give him. So instead, he handed the courier a signed note with a short message in German. 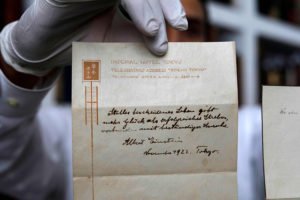 The note said. “A calm and humble life will bring more happiness than the pursuit of success and the constant restlessness that comes with it.” The courier may not have gotten a tip, but little did he know that the small hand-written message would one day be sold for one and a half million dollars. Although the origin of the note was disclosed, neither the buyer nor the seller’s identity was made public. There was a second note written at around the same time that read “Where there’s a will, there’s a way.” That note sold for $240,000.