In the food culture of Japan, slurping while eating (especially when eating noodles) is considered polite and shows appreciation for the food.Â  But not everyone finds sloppy sounds appetizing at the dinner table, especially in public. Some people are actually bothered by the noise. So a Japanese firm created a slurp noise-canceling fork to mask the sound made by slurping. 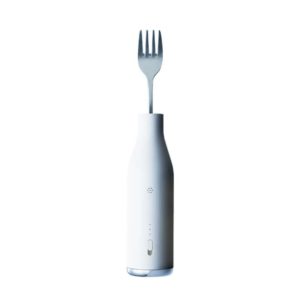 Slurping your food is considered bad manners, especially in the western world. Making loud slurping noises has even coined the term “noodle harassment” on social media. Visitors in Japan are usually startled at the sudden loud slurping noises they hear in public eateries and at restaurants. It is a shocking contrast to the reserved and polite nature of the Japanese people. 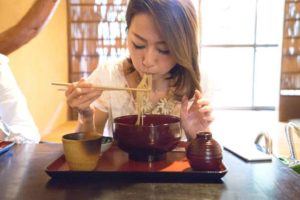 The loud slurping noise is actually a traditional Japanese habit to show the cook or the chef appreciation for the food. But others have not taken kindly to the noise. So an instant noodle producer has created an elegant solution to the problem. They invented a large fork, around 1.73 inches wide and about 6 inches long, with a sensitive microphone to detect slurps and cover it with other sounds.Â  The concept was borrowed from Japanese toilets, which feature an artificial flushing noise to cover embarrassing sounds.

Nissin Food Products applied the same concept on their fork. It works when the slurp alert is triggered. The fork sends a signal to the user’s phone, which plays soothing sounds of softly flowing water to cover up the noise. The special fork is set to come in by December and has a tentative price of $130.