Man Flies Over South Africa on a Chair Tied to Balloons

Earlier this week, 34-year old Tom Morgan strapped himself to a camping chair and tied several helium balloons to it until he was lifted more than 8,000 feet above ground. It’s a stunt that has been taken out of the famous Pixar animated movie “Up”, where an elderly man travels the world with balloons tied to his house. Morgan travelled 15 miles across South Africa on his balloon chair. 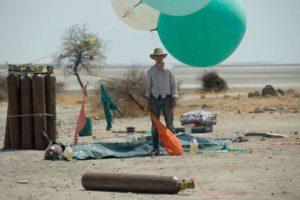 Despite witnessing amazing views and landscapes, the trip was not as easy as it seemed. Morgan, who runs the Adventurists travel company in Bristol, spent a couple of days with his team inflating more than a hundred balloons to carry him across South Africa. The flight was supposed to start from Botswana, but after a few unsuccessful attempts, it was relocated to South Africa. Morgan’s team had just enough helium for their last attempt. 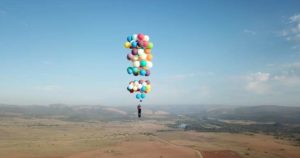 “It was a fairly indescribable feeling, wafting across Africa on a cheap camping chair dangling from a load of balloons. Sort of peaceful and terrifying in equal measure,” said Morgan. The acceleration of Morgan and his balloons quickened when they reached the inversion layer of the atmosphere. Morgan had to start cutting balloons so he wouldn’t rise too high at a certain point. Any higher and the air and temperature would get dangerous.

“We weren’t even sure Tom would come back alive. We didn’t think he was going to manage it. But yeah, he got there in the end.” said Matthew Dickens, event manager for The Adventurists. The stunt was more than just advertising for the company. It was a test run for an balloon powered race that Morgan hopes to set up with his company.