26-year old Casey Spelman was just in Chicago visiting her friends when she realized that a blind man was having trouble hailing a cab. Without even saying anything to her friends, Spelman walked away from her group to help out the blind pedestrian. She tapped him on the shoulder and asked him if he needed help getting a cab. He said yes and even joked that she sounded pretty and would probably have an easier time getting one than him. 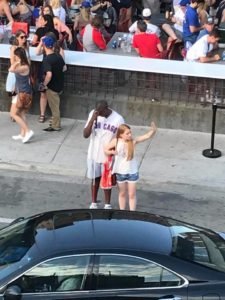 The entire exchange was witnessed and recorded by Ryan Hamilton, who had been watching from the rooftop of a restaurant from the other side of the street. Hamilton was so touched by the gesture that he posted the pictures he took of the incident on his social networking account. He praised the young woman for helping out a stranger in a town that she wasn’t even familiar with. 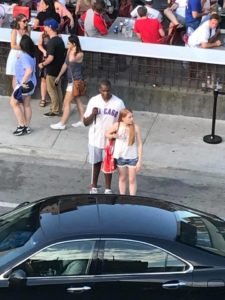 “Wanted to give a shout-out to this girl,” said Hamilton on his Facebook post. “No idea who she is, but we are in Wrigleyville on the rooftop of Old Crow Smokehouse. There was a blind Cubs fan trying to hail a cab for several minutes until the lady came up and asked him if he needed help hailing a cab. She stood there with him until one pulled up. Awesome to see such kindness in a world that the media portrays so much hate in. Share freely in hopes that her kindness spreads.” The post has since gone viral and has gotten positive responses.