Earlier this week, a woman tending to her garden in North Virginia found a very rare reptile. She found a two-headed snake. She immediately called for animal services to take away the snake from her garden. Two-headed snakes, also called bicephalic snakes are very rare in the wild, because most of them do not live that long. Not only does the mutation present several health complications, but having two heads often presents too many challenges. 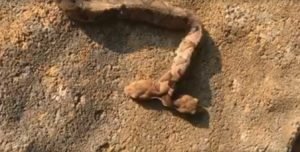 According to J.D. Kleopfer, a reptiles and amphibians expert from the Virginia Department of Game and Inland Fisheries, the snake is being taken care of by a viper specialist. It was initially taken and examined at the Wildlife Center of Virginia. In the hands of animal caretakers, the snake has a better chance of surviving for a longer period of time. They hope to bring the snake to a zoo for an exhibit. After closely examining the reptile, they found that it could be difficult to feed the snake. 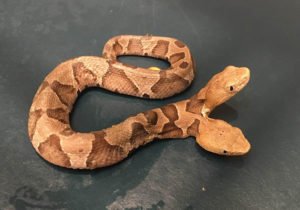 “It appears as though the left head is more dominant â€“ it’s generally more active and responsive to stimulus,” said a representative for the veterinary center, “Radiographs revealed that the two-headed snake has two tracheas, the left one is more developed, two esophagus’s , the right one is more developed, and the two heads share one heart and one set of lungs. Based on the anatomy, it would be better for the right head to eat, but it may be a challenge since the left head appears more dominant.”