Cats are known for their lithe nature. They can also be one of the most relaxed creature and they look so comfortable when they are sleeping. Unless, of course, you are watching a lion sleep. In Oregon, a woman came home and got the shock of her life when she found a mountain lion sleeping in her house. The big cat napped for six hours behind her sofa. 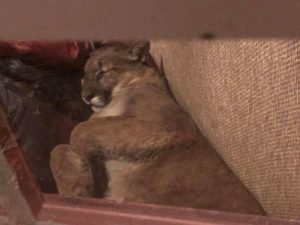 A lion had wandered into the yard of Lauren Taylor from Ashland, Oregon. It entered the house through an open back door. After entering the house, the cat was surprised by the roommate of Taylor, who understandably screamed after seeing the mountain lion. The animal then hid behind a sofa, where it managed to sleep for several hours. 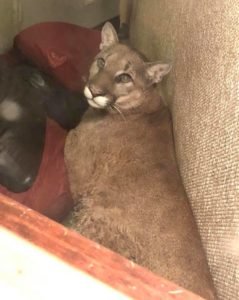 “This is wild,” she wrote. “The door was open and the room has huge plants and stairs built around real tree branches, so she likely didn’t even realize she was walking indoors until she was inside.” Taylor tried to wake the lion but she saw that it was sleeping peacefully so she let it finish its nap. But just a few hours before dawn, Taylor decided it was time for her guest to leave. She used a drum to encourage the lion to leave the house.

“It was a perfect ending to a blessed encounter that could have been dangerous if approached from a lower frequency,” said Taylor. “May she stay safely in the hills to enjoy a long life as a wild and healthy lion.”