Woman Catches Fish Bigger Than Her

Sue Elcock from England made the news recently when she caught a gigantic fish on a fishing trip in Australia. What is remarkable isn’t just the fact that fish was practically bigger than her, but also that Elcock is 68 years old. Elcock was in Perth, Australia to visit her son Simon and his wife Michele when she decided to join Simon on a fishing expedition. She didn’t expect to catch any fish, let along the catch of a lifetime. 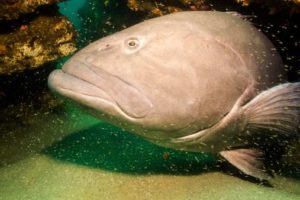 Elcock was a seasoned angler herself, but she was used to catching small fish. Both she and her son were surprised when she managed to bait and catch a giant bass grouper that was 5 feet 4 inches and weighed an amazing 130 pounds. Elcock says she felt a tug on her reel, but she thought it was just a fair sized fish and she didn’t expect to reel in the giant bass. The fish was 2 inches bigger than the 68-year old woman. 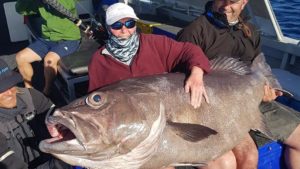 “Simon is an experienced sea angler and I have been out with him before when I have been visiting him and Michelle,” Sue told the Sun. “The biggest fish I’ve caught before was a snapper about a foot long and when this one took the bait on the bottom the tug on the line didn’t seem much.”

“I just couldn’t believe the size of it when it reared its head out the water. It was the size of a sofa,” Elcock said. “Someone said you would need an awful lot of chips to go with a fish like that.Â  But I’ve helped cut him up and get all that fish into the freezer. Simon and Michelle will be enjoying fish barbies for months when I’m long back in the U.K.”