When living near the woods or in the suburbs, you are bound to have some interactions with creatures and animals of the wild. Just recently, a mother in Louisiana found one of the most unusually creatures in her backyard. She found a two-headed snake. But instead of being scared or even shooing the strange creature away, this mom decided to adopt the odd looking reptile as her pet. 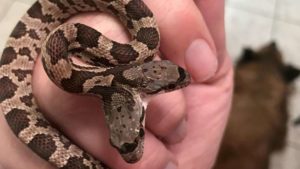 The mother was 39-year old wildlife teacher Tanee Janusz. When she saw the snake, she took it in. Janusz and fellow naturalist first noticed the snake in her backyard garden. It was a western rat snake, but it had a very unusual feature; it had two heads. The snake was just 10 months old and around a foot long. According to Janusz, this genetic defect is very rare and only happens around once in 10,000 births. The deformity occurs when the embryo does not fully divide. In this case, it resulted to the animal having two brains but one body, including just one digestive tract and one respiratory system. 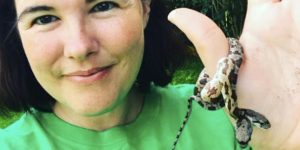 “Two-headed snakes are not totally unheard of, but they are pretty rare and this is the first time I have been in charge of caring for one,” Janusz said in an interview, “I have three kids who thought it was the coolest thing in the world.” Janusz named the snake File and Gumbo, a name for each of the heads. She and her children often refer to them as “the twins” because they have two very different personalities.