Trooper Pulls Over Retired Cop Who Delivered Him 27 Years Ago

Earlier this week a routine traffic stop in New Jersey turned into quite a reunion when a state trooper realized who he had pulled over. Apparently, the trooper had had just pulled over the same man that helped deliver him when he was born. It occurred in almost the same spot over 27 years ago today. It was a heartwarming reunion that neither of them expected in traffic of all places. 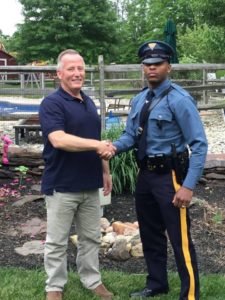 Trooper Michael Patterson stopped Matthew Bailly for a minor violation at the Kingwood Township, in New Jersey. During the conversation, Bailly told Patterson that he was a retired police officer from Piscataway. Patterson told Bailly that he was from Piscataway himself. Soon they were talking about where Patterson grew up. Bailly said he recognized the street where Patterson was from because he helped deliver a baby there 27 years ago, when he was just a rookie. This was when Patterson realized that it was Bailly that helped deliver him. 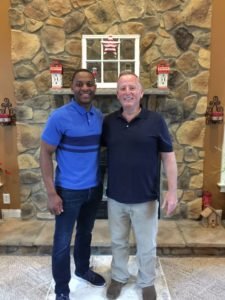 Trooper and Bailly got together again later on that week to compare notes about the incident. It seems that it was officer Bailly who was dispatched on October of 1991 to a house in Poe Place, Piscataway. Patterson’s mother had gone into labor and she barely made it home where she was being taken care of by Patterson’s father. Officer Bailly then arrived and helped deliver the baby.

Trooper Patterson and Matthew Bailly were thrilled by the news and shared it with their families. The reunion was posted on social media by both parties and the story has since gone viral. Patterson and his mother even paid a visit to Bailly and his wife at their home.