Today’s weddings have been becoming more and more creative and original. Not just with themes, proposals, and locations, but also with wedding photos and wedding videos. There have been several viral stories about the many creative ways that wedding couples are planning their big day. But this couple has to take the cake as one of the most original and extreme photo shoots. For their wedding photo, this coupleÂ actually had explosions. 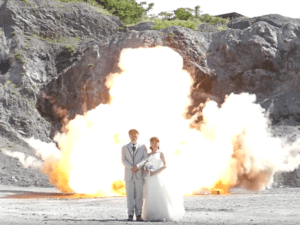 This Japanese couple asked a cosplay company named Cosnavi to help them with an idea for their wedding photo shoot. The photo shoot was taking place on a plateau at the Iwafune mountain, which was previously a quarry. They wanted to do something big and memorable, and since they were in a place where coordinated explosions were the norm, they decided to feature a big explosion as the backdrop for their wedding photos.Â There is also a video of the couple as the bomb explodes behind them. 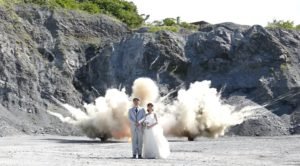 The cosplay team setup a cement bomb to blow up a few feet behind the couple, as they posed in their wedding gown and wedding tuxedo. After standing in front of the explosion, the couple is then seen running away in slow motion, just like in action movies. The couple got married in 2015, but they did not have an extravagant affair, just the unique wedding photos and video to commemorate the event. Â The video comes with the obvious disclaimer that this was should not be tried at home without the help of experts.