Earlier this week, footage from the Grand Park Zoo in Seoul, South Korea of a group of elephants showed how elephants work together to save a member of their family. The video shows the personality and instincts of these large mammals in protecting their young. They also show how these elephants are protective and helpful with each other, especially when their young are concerned. The video has since gone viral. 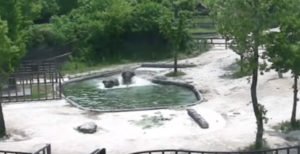 The video shows a mother and a calf just lounging beside a pool. Then the calf loses its balance and falls in the deep end. The mother appears to panic and looks around to where she can reach the calf. Soon, another adult rushes over from the other side of the enclosure and tries to help. You can also see another adult elephant separated by an enclosure clearly agitated by the situation and pacing around behind the fence. 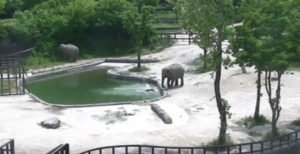 The baby drifts to the middle of the pool and the two adults realize that they can enter the water through the shallow end. They both charge into the pool and rush to aid the small elephant. The two adults sandwich the smaller calf and usher her to the shallow end. Only after the calf walks around and shows to ill effects do all the adult elephants calm down as well. The video is a rare look at how elephants work together, and think as a group, in situations where teamwork is needed. It also showed how elephants that have no relation to the calf seem to be genuinely concerned about the well being of the small elephant.