Jess Nakrayko has a lot to be thankful for. She was going to get married in Jamaica surrounded by her family and her best friends. One of her closets friend, and bridesmaid, Kessice Kieley has been with her through thick and thin and she wanted to repay herÂ friendship in the best way possible, and she even did it at her very own wedding. Nakrayko made it so that Kieley would get a surprise engagement at the wedding ceremony itself. 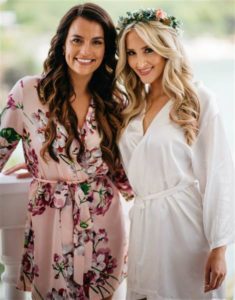 It happened at the tail end of the wedding ceremony, at the traditional bouquet toss. Instead of blindly tossing the flowers behind her back, Nakrayko approached her best friend and passed the flowers directly to her. Little did she know that her boyfriend Adam Brake, was kneeling behind her with an engagement ring in his hands. Kieley turned around and saw Brake, then burst into tears and said yes before turning around and hugging her best friend in celebration. 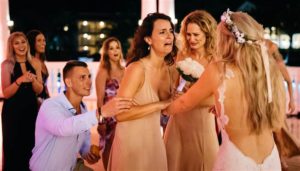 Nakrayko and Jieley have been best friends from high school and they were always there for each other. In the weeks leading up to the wedding, Kieley even told NakraykoÂ how amazing it would be if Brake proposed during their time in Jamaica. Like a good best friend, Nakrayko approached Brake and made it happen. She gave him permission and told him that they wouldn’t be stealing her thunder by making it about a proposal at the end of the ceremony. At first Brake was hesitant, but he eventually agreed and they planned to do it at the reception during the bouquet toss. The bride’s sister, who is also very close to Kieley, helped set it up with the wedding planner. One of the bridesmaids said that the wedding and the engagement madeÂ the event an amazing day of love.