One of the more modern traditions in weddings has been driving an impressive car, called the bridegroom car, out of the wedding ceremony. For this newlywed in Bingley, West Yorkshire, they had one of the most incredible bridegroom cars for their special day. They had a white Lamborghini Huracan. The Italian supercar was one of the fastest and most expensive cars in the world. But that didn’t stop the local police from stopping them and seizing the car. 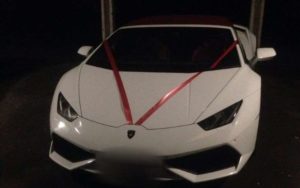 The £160,000 was seized by police on the actually wedding day of the newlyweds because he had no car insurance. The police force at the West Yorkshire Police’s Road Policing Unit took a picture of the captured vehicle and uploaded it on their twitter page. The car was impounded by the officers with the wedding ribbons still attached. The Lamborghini Huracan is named after the Spanish word for hurricane. The car was released in 2014 and has been one of the most produced cars from the Italian car maker. It was named supercar of the year for 2014. The Huracan is capable of reaching speeds as fast as 200 miles per hour. 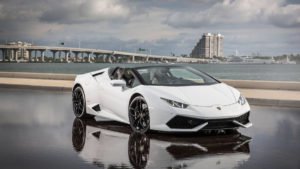 The twitter feed by the police poked fun at the motorist. They captioned the twitter photo with:”Happy wedding day, can I have the keys please the officer said to the groom!” They even added the hashtag #Lamboseizey. The police force in the United States seizes around 180,000 vehicles each year for uninsured cars. Offenders also face a fine and possible license disqualification. The owner of the car can reclaim the seized vehicle after paying the fine and addressing the ticket for having no car insurance.