When sixth grader Damon Chiodo turned in his essay on his personal hero, he expected to get a good grade, but what he didn’t expect was a big surprise orchestrated by the school and his family. Chiodo’s paper was about his older brother, Devin Tomei, and how his serving in the US army has made him a hero. Chiodo was chosen to read his essay out loud at the school auditorium. And after finishing his oration, Chiodo was surprised to find his brother in front of him. 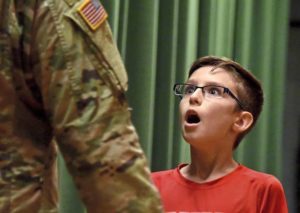 It would be the first time that Chiodo would see his brother in two years. Chiodo was shocked to see his brother at first but then jumped into his arms as he realized that it was all real. Devin Tomei is an Army Specialist and was stationed in Germany. Chiodo would occasionally talk to his older brother on Skype and sometimes they would play online video games. Chiodo would always beg Tomei to come home when they talked and he would always tell him about everything happening in his life. 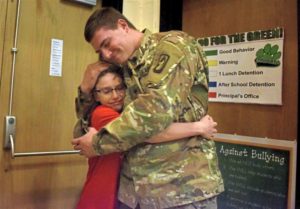 “I was trying so hard not to cry in front of a whole room of sixth-graders,” said the Army Spc. Tomei. When Tomei found out that he would be able to come home, he told his mother, who had the idea to surprise his little brother. They contacted the school at the Carlynton School District, where the school principal and Chiodo’s teacher made up an essay assignment for the special surprise. Tomei hid behind the curtain at the auditorium for 15 minutes and listened to his younger brother talk about his personal hero.