The newest online debate that surfaced includes a pair of retro Vans sneakers and its color ways. People can’t agree on whether or not the shoes are gray and teal or pink and gray. This brings back memories of a controversial dress and its colors that went viral over two years ago. And the answer to the debate could lie in the same solution that was provided for the dress color. 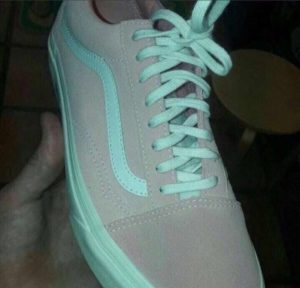 The shoes first came out in a twitter picture. Most people, including the twitter account owner, said the shoes were grey with teal details. But other people have been adamant in saying that the shoes were actually pink with white stripes. How did this happen? Just like the dress in 2015, our eyes are unable to register certain colors presented in a certain light. This leads to people seeing the shoes as a different shade than other people.

“It’s originally pink and white, the flash and bad quality camera is what makes it appear teal and grey or pink and white.” explained a twitter user on the comments section of the photo.

This all depends on your sensitivity to light, and the light sensitivity of the screen you are viewing the shoe or dress. The mystery of the dress was solved the same way, but it was never truly confirmed because the same dress was not actually found and photographed. Thankfully in this case, the owner of the original shoes took a well-lit photo of the pair to reveal that it is indeed pink and white.