Most people would instinctively recoil at the sight of a large King Cobra. Some would even run in the opposite direction. But these villagers in India not only keep them in company, they even take care of them. In a video that has gone viral, we see a large 12-foot snake slither into the middle of a village looking for water. Then we see man pouring water out from his own water bottle into the snake’s mouth. The snake in turn, seems to be peacefully accepting of the water from the man. 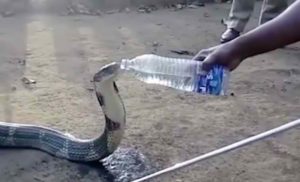 Despite the sensation that the video has caused, this is actually a very common occurrence in the township of Kaiga in Karnataka, India. During the hot summer months of the tropical country, many small animals, including snakes, wander into the middle of town looking for water. Locals are advised to call animal control and police officials when they see dangerous animals, but they are also advised to first offer water to these animals in case that is all they are looking for.

The man in the video is CN Naykka, a Deputy Range Forest Officer of the Karwar forest range. He states that: “Whenever a snake wanders into civilian-populated areas, we first offer it water. There is nothing sensational about it. The Kali River, which runs through the Karwar Forest Range is flush with water and so are the backwaters located near the Kaiga Power Plant. During summer, many different birds and animals come for water, including cobras,”